Close Combat 2: A Bridge Too Far

Considered by many wargamers to be the best in the series, Close Combat 2 is a classic real-time tactical-level wargame from Atomic Games, makers of the renowned V for Victory games. Adrenaline Vault's wargame expert Pete Hines explains in detail what makes this title a good game:

"In Close Combat: A Bridge Too Far (ABTF), you have the opportunity to test your hand at commanding either German or Allied troops in [Operation Market Garden, a] bloody struggle for control [during World War 2]. As the Allies, you try to make the push successful and rewrite history by bringing the attack to a close and seizing that final bridge at Arnhem. If you play as the Germans, your task will be to halt the advancing Allies at all costs and keep them from controlling this all- important corridor into the Fatherland. This sequel to Close Combat has both similarities and differences from the original, and offers some strong military strategy gameplay.

ABTF really offers three ways to play: battles, scenarios, or campaigns. Each relates to how much of the map -- which shows the key points of Operation Market Garden -- you play at a time. A battle is a single skirmish that takes place in one location. A scenario is a series of interrelated battles, in which your performance in one battle determines your troop strength and position for the next battle. Scenarios comprise a larger portion of the overall operation. A campaign is made up of several scenarios linked together and includes a major part of the operation, or can be the entire Operation Market Garden, from beginning to end.

Each battle map has a number of objectives spread throughout the landscape. These objectives will be controlled by one side at the beginning of the battle. If you are playing the "battle," then you have no choice over which soldiers to use, but you can determine where you want them to begin the battle. If you are playing a scenario or campaign, you can pick and choose, up to a point, the type and number of units you'll use in the upcoming battle. Depending on which side you are playing and whether you are defending or attacking, you will have a lot or only a little room in which to maneuver your units before the fighting begins.

Commanding your troops is largely a point-and-click affair. Right-clicking on any of your units brings up a menu of options for that unit. By pointing to a location on the map (i.e, at a building or enemy troops), you can move that unit to a particular location or ask him to fire his weapon. Individual soldiers are not controlled, but rather you command a group of units, whose size can vary. You can order troops to move, move fast, sneak, fire, lay smoke, defend, or hide. Moving means heading towards the indicated location while looking for enemy units while move fast is a quicker move and with less regard for locating or firing at the enemy. The sneak command is used to move at a much slower rate with the objective of reaching the target undetected by enemy forces, and defend means you want them to stay put and, well...defend. The hide command means they'll look for the best cover in their immediate area and try not to be seen (good for ambushes).

If you're ready for new and different challenges, use the game's battlemaker to construct your own battle. Starting with one of the maps provided, you can determine which and how many units each side will have. You can also choose where to place objectives on the map and how much each one is worth. Using the battlemaker you can see if a small, but experienced and heavily-armed group of soldiers can hold off a larger, but less equipped force.

This game was an awful lot of fun to play and very addicting. It's a very solid four star game and should get serious consideration for adding this to your game library. It was the type of game that I'd end up looking at the clock and realizing that three or four hours had just gone by without me noticing it. There are very few games of this type out on the market that kept my attention the way ABTF did. For those that have played the original, this game offers a ton of improvements. I think Atomic did a great job of making a good thing even better, without messing up what they had already established. This is definitely a sequel worth getting, and a great game for anyone looking to make an entrance into this genre. "

Students of World War II have long been fascinated with Operation Market Garden: Monty's ballsy push into the Netherlands to cut off the Germans in the west. The idea was to use a single, concerted thrust, rather than a broad advance, to knock the Germans into a smaller box. The problem was the numerous Dutch rivers that lay in the path of the advance, and the solution was to use paratroops to capture the bridges at Eidhoven, Nijmegen, and Arnhem intact. From there the Allies could turn their attention to the Fatherland itself.

The operation, recounted in Cornelius Ryan's classic narrative history A Bridge Too Far, started out well, with many of the bridges captured quickly. But things bogged down at the farthest point, Arnhem, as the British and Polish Airborne Divisions were cut off by a concerted, and unexpected, counterattack by the 9th and 10th Panzer SS Divisions. Of the ten thousand men caught in Arnhem, only two thousand would escape. It was nasty, close-quarters fighting for a single bridge and the city surrounding it. In some case, combat degenerated into house-to-house fighting.

Keith Zabalaoui and Atomic Games are no strangers to Arnhem: Their V for Victory: Market Garden is the best simulation of the battle ever produced. Atomic has left behind its landmark turn-based V4V engine for a new landmark system in Close Combat. Now, with Close Combat: A Bridge Too Far, Atomic is taking the system to the next level and once again turning its sights on Market Garden.

"Operation Market Garden was exciting," Zabalaoui points out. "If you don't know that much about it, there are several books and even a terrific movie about it. It was a late war battle with elite German, British, Polish, and American airborne units, and German and British infantry and armor units. Either side could win, although the odds are against the Allies. And the clock is ticking all the while. Oh, and as the British player, you get to shoot at tanks with spring-loaded anti-tank weapons. What could be more fun?"

Close Combat: A Bridge Too Far is not just a new battle and set of units in an old engine: The entire game has been rewritten from the ground up. The biggest visible change is in the maps. In the original, Atomic rendered little tiles and pieced them together to form the game maps. For A Bridge Too Far, however, they prerender each map as a whole piece that is kept in memory. They look sharp, scroll much faster and more smoothly, and depict the battlezones more accurately. (Pre-invasion aerial photography was used as the source for the maps.)

One complaint about the original Close Combat was that the men were too small, which was true since, of course, they were in scale. To address this complaint, the men in A Bridge Too Far will be slightly bigger. One wag who saw the early screenshots compared the resized soldiers to "bloated Ronald McDonalds with automatic weapons." This has changed: "When we posted early screenshots of A Bridge Too Far, a lot of people said they didn't like the size of the men; they were too big. This is frustrating because the single biggest request from Close Combat was to make the men more visible. In reality, the men are about one or two pixels bigger, but the buildings are now to scale. In Close Combat, the buildings were 2x or 3x. Even so, we have redone all of the soldiers since we released those first screenshots. I think people will find them more agreeable and stop comparing them to gun toting, obese versions of commercial spokespeople."

In addition to mapping, the interface has also been changed and streamlined, making all the functions more accessible. A strategic layer has been added that allows the player to choose where to fight next and how to handle supply. It wasn't a matter of not being happy with the original Close Combat, Zabalaoui says, but of taking the next step forward: "I really feel good about Close Combat. I'm proud of it and what it represents. I can't say that I'm disappointed with anything in it. A Bridge Too Far just lets us improve what we did for Close Combat. I told people on Usenet that we were keeping a list of their suggestions and I wasn't lying. We had lengthy list of items and we went over each and every one prior to the start of work on A Bridge Too Far. Many of the changes came from that list. To name few, we now let you issue orders during deployment, we changed the way battles end, and we allow the player to customize his forces prior to battle."

Some of those forces will include a few new units, for a total of 130 different kinds of units, including British and Polish forces as well as American and German units. The most requested was a flamethrower, so Atomic implemented several different kinds. There are also new German armor and half-tracks, American-made Firefly tanks, and more. The behavior model for all these units is also being tweaked, including the psych model and the AI. Tank behavior has been improved, and troop logic now governs the use of multistory buildings.

But why does Atomic keep returning to World War II instead of something fantasy-based or even modern warfare? "We've considered it a lot," Zabalaoui explains. "We're not married to WWII. We'd love to do a sci-fi or fantasy game if we found the right one. Right now, though, I think there's a glut of sci-fi games either on the market or in the pipeline. Fantasy is possible, too, but we're not finished exploring Earth's history. It's fascinating. I couldn't make this stuff up." 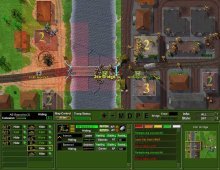