101 Airborne: The Airborne Invasion of Normandy

101 Airborne: The Airborne Invasion of Normandy is a much-overlooked and now out-of-print squad-level wargame from Empire Interactive. Alan Dunkin's thorough review at GameSpot says it all:

"Over the past few years there have been a number of squad-based simulations, typically of the science fiction variety (with X-COM being the most famous of the bunch). But wargamers - with the Breach series, Close Combat and its ilk, and Soldiers at War - have also had their share. Soldiers at War, developed by Random Games and SSI, was a decent World War II tactical game although marred by the single-mission format, some strange gameplay mechanics, and a few other things that kept it from being truly outstanding. The same development group created Wages of War for New World Computing, which suffered from many of the same problems. Now, some ex-Random Games employees, under the Incredible Simulations moniker, have revisited the arena with 101: The Airborne Invasion of Normandy, a really good game that overcomes some of Soldiers at War's problems.

The setting is a few hours before the Allied invasion of Normandy; the 101st Airborne Division (the Screaming Eagles) is to be parachuted in groups all over Normandy in order to create enough havoc and mayhem to disrupt and distract the German Army from rushing reinforcements to the Normandy beachheads before they can be properly secured by the invading forces. You take control over one such group, a "stick" or planeload of 18 paratroopers. After picking one of nine campaigns (basically initial mission objectives), you are then assigned the task of picking, outfitting, and equipping each of the 18 paratroopers to accompany the mission. Forty-eight troops are available, each with varying skills and abilities - it's your job to sort out which is best for the mission. This can be done either individually or by an auto feature for each area, which speeds up things tremendously, though players with a bit more time on their hands will probably want to fine-tune things a bit.

After the troops are ready and the drop arrangement is set, it's time to take off and drop into enemy territory. One of the great things about 101 is that it does a very good job of simulating the chaos and uncertainty of airborne combat operations. Any number of things can happen to the men when they drop out of the plane: They can land safely, injure themselves on landing, get lost or become completely attached from the rest of the stick, or worse, have a parachute fail. The equipment bags carrying much of the heavy ordnance and supplies can get lost. The men can wind up scattered throughout the entire game region. Better yet, some men can land right in the middle of a patrolling German squad. Those minutes and even hours spent equipping the troops will seem like a tremendous waste of time if most of the equipment is lost.

101 uses an overhead tactical view to display the action. The graphics are nice and functional - nothing great, but they serve their purpose. Each of the soldiers is meticulously animated, and the terrain shows everything you'd expect in Normandy: roads, trails, hedgerows, copses of trees, shrubs, buildings, and so on. 101uses a turn-based point-driven engine, where each soldier is assigned a number of action points (APs) each one-minute turn, and every individual move (of which there are 24) uses up a certain number of APs. The order in which they get to activate is determined by each soldier's initiative - that's including the German troops. The sound effects are passable, though a few are a bit bland.

Combat obviously is the most important part of a game like this. There is a number of available weapons and explosives in the game, and 101 boasts one of the most accurate damage models yet put into a commercially available game. 101 also uses an extensive sighting system, which not only shows what the soldier is capable of seeing and how well he is covered, but how well visible enemies can see you, utilizing visual icons surrounding the soldier in question. This innovative system can be a bit confusing and at times can appear to be wrong when it may not be (which is not to say that it isn't working properly, but that there are so many variables it may be hard to tell the difference). However, combat in 101 seems to work very well and certainly conveys a realistic feel.

Ultimately the player will need to reunite the stick as much as possible and accomplish the initial objective. Once this is accomplished, the game can go on as other missions or secondary objectives may become apparent. The game ends either way by the end of the third day. Some may find this a bit too short, but any one of the nine campaigns can last quite awhile, keeping track of the troops, trying to reunite them, getting them some rest, moving towards an objective, and running into unexpected obstacles. Unfortunately there is one prolonging factor that's a bit irritating: the hellishly slow soldier animation. A map may be completely devoid of anything interesting, and the time it takes a dozen soldiers to traverse it can seemingly last for hours. Equipping the men may seem like a waste of time, but the good news is that you can save the equipment and crew loadouts individually so you can reload them when you want to run a new campaign.

Success in 101 requires luck, good squad organization, team tactics, and proper utilization of terrain. 101 simulates the chaos of an airborne drop very well, and the level of detail is tremendous. The manual explains everything, but learning the game can be done through experience only (a training ground is available). Everything is explained: how many APs each action requires, the statistics behind the weapons, and how much each individual item - right down to the entrenching tools and K-rations - will encumber the soldier. Throw in multiplayer games (the only way you can play the Germans) and this is quite a game. There's also no way to make new campaigns, but the results can be so random during a campaign that this won't be too much of a hindrance. While the scope is limited and the level of detail can intimidate some, 101: The Airborne Invasion of Normandy is a winner." 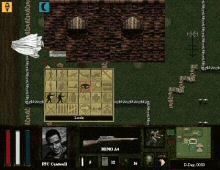