Atomic Games, best known for the V for Victory games published by Three-Sixty, has revamped their already highly evolved engine for these "World At War" games that capture bocage battles and several interesting stalemate situations in WWII. At a scale of one-hex-equals- one-kilometer, the map design vividly recreates the restricted, even claustrophobic, nature of the terrain. Excellent AI, campaigns, and intuitive interface make the series some of the best wargames ever made. Highly recommended!

Note: This download includes all three World at War games. 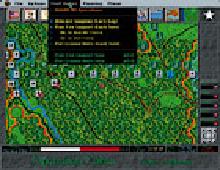