"A faithful adaptation of the famous boardgame, this version was the best ever done; note that this does not mean it is really good, just that it is the best ever done. The main problem is that it was perhaps too faithful to its paper antecedents -- and it did not even reflect the newest edition of the paper version. For a novice, this simulation is virtually unplayable; for true believers, it will offer a fix for those lacking human companionship."

Although Third Reich disappointed many die-hard wargamers when it was first released, the latest patch (1.38, which you can download below) fixes most of the problems to make the game shine like it was meant to be. Definitely a must-have if you are interested in a realistic, complex simulation of WWII conflict-- be sure to apply the patch, though ;) 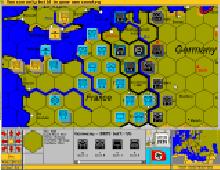