As the title suggests, High Command puts you in command of the Allies or Axis during the most crucial points of World War 2. In contrast to Harpoon's micro scale, this game is decidedly a strategic-level wargame a la Gary Grigsby's games: control the Allies or Axis air, land, and sea forces in Europe. Well-researched realism and scenarios are bogged down beneath spotty AI, cumbersome interface, and questionable supply logistics. 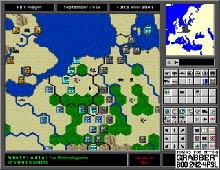