Imperialism 2: The Age of Exploration

Imperialism II: Age of Exploration is an outstanding turn-based strategy game that expands on the premise set in its predecessor, Frog City/SSI's underrated Imperialism. The game is set in real world history this time as opposed to a fictional period in the first game: specifically, you are one of the European Great Powers at the time of exploration and conquest of the New World. Your goal is to dominate Europe using the tools of conquest and diplomacy, and exploiting the riches and exotic resources of the New World. You might become a great conqueror, in the tradition of Cortez, or you can do business with the natives, and shield them from the other Great Powers. Whichever strategy you pursue, you will need to build a strong economy, develop what resources you can, and trade for the rest on the world market.

Similar to Imperialism, Imperialism II is a game of interdependencies between economic, diplimacy, and trade. Although the real-world setting may make the game more interesting to play, it also "bootstraps" the game -- forcing it to deal with the perennial conflict between realism and playability. Proponents of realism in historical games will certainly be annoyed at some "ahistorical" outcomes and the fact that Imperialism II presents many elements in the abstract. Nonetheless, the game's excellent AI and addictive gameplay should be enough to make every strategy fan happy. You need to build a strong labor force, and recognize when your self-sufficient economy needs to expand via trade and military expansion. The New World elements are not meshed very well with the game-- it is as if the designer took the engine from Imperialism intact, and added New World exploration to it just to make the game different, without trying to assemble the interdependencies that the first game excels at. Certainly aspects such as dealing with the Natives could be better exploited and interlinked to other elements. Still, they present a nice addition to the game, and proper New World exploitation wil provide a handsome return to finance your expansion at home.

With an excellent gameplay and a better AI than Imperialism, this sequel is a must-play for all strategy fans. It was shipped with some embarrassing bugs that were fortunately fixed in a later patch (you can download the cracked patch below). While not as elegant as the first game, Imperialism II ranks as one of the best strategy games ever made.

Imperialism II: Age of Exploration is a turn-based strategy game set in the time of the exploration and conquest of the New World. In this sequel to the critcially acclaimed game Imperialism, you take on the role of one of the European Great Powers. Your goal is to dominate Europe, your tools are conquest and diplomacy.

The riches and exotic resources of the New World are there to be discovered, the key is to exploit conqueror, in the tradition of Cortez. Or you can do business with the natives, and shield them from the other Great Powers.

Whichever strategy you pursue, you will need to build a strong economy. Develop what you can internally, trade for the rest on the world market (but watch out for pirates). Build a good labor force. Try to get ahead in the technology race (get those spies out there). And don't forget a strong military, for only a mighty nation can unite Europe under one flag. 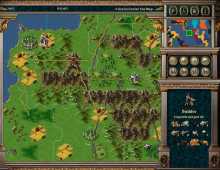 Imperialism 2: The Age of Exploration screenshot

People who downloaded this game have also downloaded:
Imperialism, Settlers II Gold Edition, The, Lords of The Realm 2, Magic: The Gathering