You would'nt think it would be so hard to convert a board game into a computer game. It's been done since the early days of computer gaming, with companies like Avalon Hill leading the way. But board games are REALLY tough to make into a great computer game. You have to program a good AI that makes the game enjoyable in solo as well as multi player play. You need to win over the hearts of people who love the board game AND attract new gamers. And it has to have the same fun quality that the board game has.

In addition, the more complicated the board game is, the harder it is to have a successfull PC conversion. The games that Hasbro did -- Life, Monopoly, Scrabble, Clue, etc -- are very good conversions mostly because the games are simple and there are numerous players online. Microprose/Hasbro really had a tough time with Axis and Allies at first, but later patches and then the Iron Blitz add-on made the PC game the perfect conversion of the board game. All these games have good AI, making solo games just as enjoyable as MP experiences. But if the game has a horrible AI, it turns people off no matter HOW much fun the board game is or how well it plays in MP mode.

This is what happened to two complicated board game conversions in the late 1990's. Namely, Microprose's/Hasbro's Diplomacy, from Avalon Hill, and Red Storm's Politika. Both games are a blast to play in board game form. Both games look and play very well on the computer. Both games are a joy to play online with friends. But both games have the WORST computer AI in solo mode I have EVER seen! Because of that, neither game sold very well, although I still play both games online all the time.

Politika was one of the first games that Tom Clancy did for his new company Red Storm Entertainment, and it kicked off with a lot of press and effort. The PC game, the board game, and a novel based off the games (but not written by Clancy) were all released at about the same time. Including a book with the game was a novel idea that's only been done a few times in the past and was repeated again by Clancy with Rainbow Six. There was a online contest for the best Politika player that attracted many gamers. Once the contest was over, though, the fan base of the game shrunk a lot.

Which is too bad, because here you have one of the best PC games that plays like a board game. The story is the year is 1999 and Yelstin has died suddenly, throwing Russia into civil war. You play one of eight political factions trying to gain control of the country. But instead of doing it with the military, like so many other games, you do it with poltical influence and money. Each faction has a advantage but who gets what faction is randomly determined. The music on the main menu is great and helps you to get into the mood, but it's the only music in the game, sad to say. You can pick from solo or MP mode, and there's a complete online version of the manual from the game screens and a helpfull tutorial that can get you playing in no time.

You can customize the game by selecting how many factions (2 to , how many turns (4 to , if you want to play with cards, random events, and other things. In MP mode, you have to connect to a central server -- your password is printed on the CD case. From there, you can see any open games. The Host has to decide what kind of game to create before anyone can join, though.

Have I mentioned how much Politika looks and feels like a board game? It's the best 'feel' I've ever seen. The game screen never changes: a map of Russia, dividied into regions. Each region has a base production value, and three boxes on it. Each box repersents 1/3 control of that region by a faction. So if all three boxes are your color, you control the region entirely. There's also three 'moving' pieces -- students, demostrators, workers, that also have three control boxes. You also get two guys to attack and defend regions with. Actons are decided by rolling dice, and you also start the game with three cards. These cards can be used to give you free attacks, boost your defence, and other fun things.

Play order is determined randomly. At the start of turn, money is collected. The AI randomly decides three regions and checks to see who has control of it. More control means more money. So if the Communists controled two blocks in Moscow and the Church one, the Commies get $40k and the Church gets $20k. On your turn, you can move your pieces, attack enemy tokens in the region a piece is in by spending money to buy dice, play cards, and then spend extra money to buy more cards. When each player has gone, the turn ends, and the next starts. At the end of the game whoever has the most points -- awarded for control of regions and money in the bank -- wins. But one of the best things about the game is that it can NOT end on a tie -- SOMEONE has to be head. If the game ends on a tie, Russia collapses and NO ONE wins or gets points. It's a nice touch that should be included in more games.

Solo mode is really disapointing. Once you get the hang of the game, you'll never play it again. The AI is QUITE bad and it's just too easy to win aganist it. If you put the game aside for that reason, though, round up some friends and give MP mode a try! The game is quite stable in MP mode -- I've played in fully manned (eight player) games with narry a problem. The only serious drawback to MP games are that turns can take a long time -- each turn is about 45 minutes for six players -- and if the host crashes, the game ends.

What makes MP mode so exciting? Well, there is the fun board game feel as I mentioned eariler, but also what you can DO with the game. You can chat with all the players in real time, and send private messages. You can form alliances (if the host allowed for it in the game setup) with mutal defence bonuses if a territory is attacked, and it can be broken any time. You can even evesdrop on someone else's private conversations -- with the risk they are alerted to your doing it! Cards, tokens, and money can be traded, and you can go out of your way to help or hurt a friend.

Politika has one of the best back stabbing, evil, sudden change effects in numerous MP games I've played. Often you will ally with someone to take down a faction that shot ahead (only two players can ally) only to help your friend out in the last turn, and then HE breaks the alliance and attacks you! You can win the game while in a alliance but you get more points for a solo win. The game can change in a minute, with some bad attacks or a well placed card, and making sure SOMEONE wins means you often have to choose the lesser of two evils if you are far behind.

In summary, Politika is a fun game, the best board game conversion I have ever seen. This has a cult following, a small but very loyal group of players. In addition, Multiplayer games will keep you on the edge of your seat for hours -- so rare to see that in a board game! Too bad the solo game is the WORST solo game I have ever played. It pulls the overall game down to a average game. If you're looking for a good board game to play online with friends, you'll really like this one. If you like board games of this nature, try it anyway. 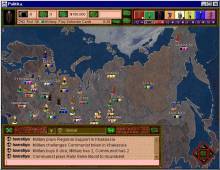