Regarded by many wargamers as the BEST complex wargame ever made, TacOps is a simulation of modern tactical combat between US Army/US Marine Corps/Canadian Army and Russian equipped "opposing forces" (OPFOR). Most vehicles, unit organisations and weapons featured, both real and hypothetical, are meticulously researched. There are 64 scenarios, each of which can be customised, and the option to build custom scenarios. TacOps supports solitaire play against a tough AI and two-player play via hot-seating, by mail and by network. TacOps Classic, published by Avalon Hill, contains all the upgrades that the designer of the game has added over the years, including units from Canada, Australia and New Zealand, as well as additional scenarios maps, including some large maps of real training areas such as Fort Irwin in the US. A must have for every wargame expert! Major Holdridge, designer and copyright & trademark holder of TacOps, has kindly granted his permission for this version of the game to be distributed on this site. 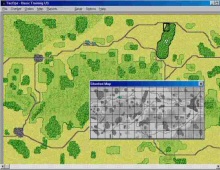