The War College is the third and last entry in the revolutionary but never-caught-on Universal Military Simulator (UMS) series, first released in 1988 by Rainbird. Similar to two previous UMS games, The War College is different from "typical" wargames in that it uses real-time terrain, with realistic maps that have been meticulously reproduced from both historical accounts and satellite surveys; every road, stream, hillside, and valley has a precise and accurate effect on movement, observation, and combat. Some wargamers are going to find this initially off-putting, but the more you play, the more you will (hopefully) come to appreciate the designer's efforts. By setting waypoints and unit facings, you can execute broad, sweeping maneuvers or zoom in close to deal with surprise movements by the enemy. Modem and network play are supported, although old fashioned two-player action on one machine -- the classic "hot-seat" option -- is not.

The four battles included in the initial package (promised add-ons unfortunately never materialized) cover four classic eras of military history: Caesar and Pompey duke it out melee-style at Pharsalus; Napoleon out-maneuvers the Allies at Austerlitz; Lee and McLellan savage each other at Antietam; and the outnumbered Germans take on the "Russian Steamroller" at Tannenberg in 1914.

Each battle is supported by an excellent interactive historical reference section, filled with hyperlinked subjects you can explore in great detail. If you access the Austerlitz section, for instance, you'll find 44 topics in the table of contents; very impressive indeed.

Obviously, this program is aimed at the serious student of military history rather than the casual gamer. Beginners to the genre should be able to get the hang of the game pretty quickly, however, thank to its friendly user interface and excellent references. Overall, The War College is a mature, deep, thoughtful simulation that embodies a radical departure from the wargaming norm. The AI is none too bright, but the game does introduce many innovative features that unfortunately not picked upon in later games. Recommended to all armchair commanders, but be warned of the less-than-intelligent AI. 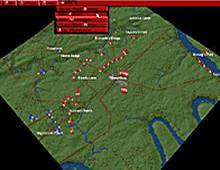