Another poor game from Capstone, whose record of releasing terrible games is probably unmatched in PC gaming history. The concept is interesting enough, as MobyGames description puts it: "[Terminator 2: Judgment Day - Chess Wars] is a chess game based on [the movie of the same name], featuring sounds and characters from the movie as pieces. Captures are animated a la Battle Chess, but the battles take place off the board, in futuristic wastelands and similar stages. The game offers several difficulties and play styles to choose from, along with time control, ratings on the USCF scale over different time-frames and other niceties. Oddly enough, there's no 2D board."

It all sounds very good, just like the blurbs on all game boxes, but once the "coolness" of seeing various Terminator 2 characters battle out on the screen wears off, you're left with a very poor chess game that sports bad AI, and a clunky interface. The game is not as bad as Capstone's other efforts, to be sure, since there are enough bells and whistles to entertain fans of the movie and casual chess players for a while. The animations are blocky, but still quite funny to watch for the first few times. If you want a strong chess game as opposed to campy-chess-wannabe-with-license-wrapping, though, you'd best look elsewhere. 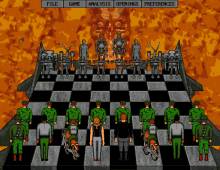