One of the most underrated chess games ever made, Titus' Virtual Chess for Windows is a fun chess game that offers multiple skill levels, although the game's strenght lies in excellent tutorial options that novices will find very instructive. Based on an award-winning algorithm, Virtual Chess boasts great 3D models designed by Silicon Graphics, challenging computer opponents, and a myriad of options you would expect in a good chess game.

Undoubtedly the best thing about Virtual Chess is the superb teaching value. In real time, the game can show you the opening move in process, evaluate each position, and give helpful hints. The tutorial is much more in-depth than an average chess game, introducing you not only to chess rules but also the different styles of playing. My favorite feature is the Grand Master chess matches: the game not only allows you to watch the replay, but it also interrupts the game periodically to ask you to make the "right" move given the situation.

If you are looking for an educational chess game, Virtual Chess is well worth a look. Its tutorial options may not be as attractive to youngsters as Maurice Ashley Teaches Chess, but it will appeal to any chess novice who does not need cartoony graphics to learn the ropes. This game also deserves mention as the first PC chess games that were ported to Nintendo 64 console system. 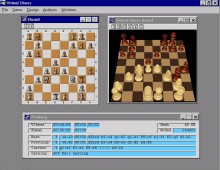