Monopoly Tycoon, like the name suggests, is based on the classic board game "Monopoly". It has all of the classic locations, as well as a set of docklands properties which may or may not be from some international version of the game I've never seen.

Unlike the board game, which took a completely abstracted approach to running your business empire, this game throws you into the daily affairs of organising a business empire.

In this game, you can run day stores (which fall broadly into two categories, food and goods), and night stores (which sell entertainment services), as well as setting up apartments and hotels. The citizens quickly learn which blocks provide which services, so organising your blocks into sets of each of these three areas is a must. Stock is bought in the morning, and maximum levels are dictated by the base size and number of floors of the business. You can set prices for the goods sold in the stores, too, and you have to keep an eye on the opposition to make sure they're not undercutting you and stealing away our business.

The AI of the city's inhabitants is good, they learn where they'll get the best deals, and they will ignore you if you're not it. The class system of the townspeople is basic, but effective, the poorer people are, the less concerned they are about image and location, and more about price. The rich people don't care how much they pay, so long as they don't have to walk too far to get it, or hang around with the plebs of the city.

It is possible to lease city blocks for 25-year periods, which can bring you rental income from opponents' properties, or simply prevent you from having to pay it.

There are also city services, such as the Railways, Waterworks and Electric Company, as well as the new Telecoms and Gasworks utilities. Building up a monopoly of either of these aspects of city services is just as devastating as it is in the board game.

Opponents' AI is variable, opponents tend to change radically when they're in trouble, but all are consistent with the way they're described by the game. Not too nice for the couple of AI players the design team decided to brand "moron", though. You'll find that a player will usually follow the same tactics, game after game. Some want property, some want lots of businesses, some want the utilities, and it's possible to learn these patterns and exploit them, but they really do feel as if you're playing and exploiting the weaknesses of a personality, rather than just a bot.

Overall, Monopoly Tycoon is one of the best "modern conversions" of popular board games you'll ever find. The underlying economic model is top-notch, the gameplay is fun and innovative, and the nostalgia is intact. The game moves at a frantic pace which may just prove too much for some, but which is ultimately true to the spirit of the board game. Highly recommended.

Monopoly Tycoon uses the popular board game as the base on which to build a strong and innovative, and great-looking, real-time game of business management and city building.

Monopoly Tycoon is a fun game about buying and selling property, building businesses, and managing money. While the game includes a great deal of depth and a significant number of options, some of that complexity is optional, which leaves a basic game that's straightforward enough for almost anyone to play. Fans of Monopoly will appreciate the way Monopoly Tycoon extends the board game into a new and interesting direction, and the game's few minor faults are far outweighed by its strong combination of crisp graphics, involved and varied gameplay, and entertaining premise. 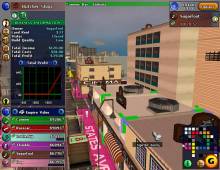