In one of the most original strategy games, the premise of Pizza Tycoon is unique: you are a pizza guru/businessman/gangster who must build up a reputable chain of pizza restaurants while dealing with mafias, picky customers, and local authorities. The downside of this game is the confusing interface and some illogical random events. Regardless, creating successful recipes is never boring :)

Pizza Tycoon, one of the most innovative business simulations I've ever played. I don't like cheese and that means I don't like most pizzas too, but in this game, I forgot all about that. I actually played it a lot, quite some time ago. I never became a champion at it, though.

It's a hard game, with a very high fun level. Every aspect of the pizza market is treated. But I don't get it, why does every game, which involves an Italian subject, always have a lot to do with the mafia? I think this country, Italy, is sincerely misunderstood.

I recommend this one. No, I want you to try this one out. This might be one of the best examples for the nostalgy of true oldies. It's not about the graphics, it's about the game.

"So you wanna be a gangster?"

Actually, this isn't exactly 'Goodfellas', but it is one hell of a game!

It starts off where you are a no-body with a bit of loose cash, who just happens to want to buy into the restaurant market. Unfortunately this is the pizza world, lead by Italy's top business men, oh yeah, and of course the mafia.

Your aim is to become the world's biggest company, and you will be wanting to reach your aim by any means possible. This includes bribing governors, advertising, investing, buying more shops, oh yeah and of course starting your own crew and paying the mafia to blow up, destroy, and take over the competitors. The amount of features available in this game are endless! You could play it for months and never get bored.

During the day you are the legitimate business owner, buying, and setting up restaurants, with your own furniture and hiring staff, along with dealing with business propositions. Where as by night you become the 'Don', leading your mafia crime syndicate to war with opponents, making sure they have no chance to compete by any means you see fit.

This is a top notch game, with nice graphics, good sound, and brilliant game play. Download this baby now and I promise you will have endless hours of fun!

Pizza tycoon was one of those games that swarmed into the shops after the major success of Transport Tycoon. It is not as commonly known as its big brother (or as good), but it is a fun little game to play once in a while.

You start with a dream of becoming the biggest selling pizza maker in the world and gradually work your way towards this end by winning pizza contests, inventing new pizzas, building the coolest restaurants, and of course, by blowing your rivals up! The game has two sides; one is the friendly and inventive pizza maker…. And the other is a sinister and cold-hearted Mafia boss! Not only do you in the end rule the pizza market, but you also rule the underworld!

The process of making a new recipe for your restaurants are based on real pizza making, and I find it difficult to play this game without wanting a pizza afterwards. Building a new restaurant is also great fun, as it enables you to use your creativity to make every little detail. Remember to build a restaurant that people will like. Pizza Tycoon is one of the rare games out there where beauty is a necessity in all that you do.

Graphics in the game is extremely well made from the maps of the city and the world, to the details on the pizza and the flowers in your little pizza place.

Microprose has succeeded in creating a game that is fun, inventive and new. Pizzas will never be the same! 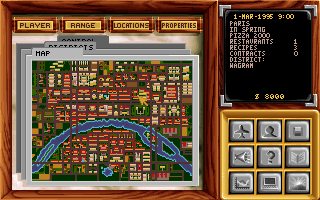