Supremacy is the game of strong nerves. You are taking command of a human colony in an unknown system. Unfortunately, the system has not been inhabited only by humans. There are other, alien species that are not very friendly and are not willing to share the territory with You. Who will control the system? You and Your armies will decide.

A great galactic domination game, Supremacy (known in Europe as Overlord) rivals better-known classic Master of Orion in solid gameplay and excellent AI, although with a less intuitive user interface and stronger emphasis on resource management and number-crunching than on galactice battles.Supremacy is essentially "chess in space" due to its emphasis on number-crunching and tactical planning. The goal, of course, is to conquer the solar system. As in chess, you and your enemy start at opposite ends, on your respective home planets. Unlike chess, however, there is a lot more to think about than maneuvering your units. As in most "4X" games, you can set the tax rate, buy spaceships, and terraform uninhabitable planets. If you manage your resources well and expand cautiously, you will gradually take over the whole solar system, which culminates in the battle for the enemy's home planet. The number of planets in a system depends on the difficulty level, so in this game, an easier setting also means a quicker game, since there are less planets to conquer. The fourth and hardest level of play, similar to the hardest difficulty setting in MOO is very challenging. One of the best features of the game is that you can see how much stronger your enemy is relative to you at anytime, by the silhouette of a face behind the solar system display panel. The brighter that this face is, the more the enemy is winning.

One common criticism that has been directed at Supremacy is that it plays like a spreadsheet with pretty graphics, as the game has a lot of statistics to keep track off, and the outcomes of many events are represented with (boring) numbers instead of attractive action graphics of MOO. For instance, when you send troops to a planet to do battle with the enemy, you don't actually see the damage they inflict on the enemy. This might put some gamers off, but the game is really about the management of resources, not galactic warfare. In conclusion, Supremacy is a must-have for any armchair commander looking for a real challenge in resource management and strategic planning. However, MOO fans who espect to see research cabilities, ship design, and tactical battles will be disappointed. For a game that isn't as complex and "dry" as Reach for The Stars but more numbers-oriented than MOO, Supremacy is the best there is. 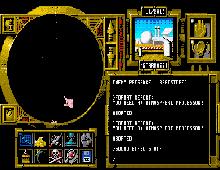