Super Dune is based on the popular and revolutionary real-time strategy game that created a completely new genre and cleared the road for later games such as Command & Conquer and Red Alert. Super Dune wasn't developed by Westwood that was behind Dune 2 but made by a group of dedicated Dune 2 fans.

The main differences between Dune 2 and Super Dune are modifications that were made to the 3 houses with completely new skills. The original houses haven't been left out so you are up for a few surprises in the game. Of course this doesn't make the game easier and therefore it's also obvious that this game was made as an add-on which is also normally harder to complete than the original game. So Super Dune should only be played if you really want a challenge and know the original game.

The game features the same graphics and sound so only in game features have been made and the original game stayed intact with pretty much everything else. A recommended game for all fans of both the actual Dune series but also to real-time strategy fans to see what really started this genre. Note that this game is of course freeware as stated above that Westwood isn't behind Super Dune but simply fans that got permission to make modifications to the original version.

Unzip each new zip file to a disk and install from the first disk.

Dune 2 was THE real-time strategy game that single-handedly created a new hot genre and catapulted Westwood to fame. Two years after its release, a group of Dune 2 fans created a special version of the game called Super Dune 2, which substitutes the original 3 Houses in the game for the Mercenary, Sardaukar, and Fremen, each with unique attributes (e.g. the Mercenary is invisible to radar, but cannot create any 4-block structures). The original Houses also do not disappear, but will show up to fight you from time to time. This is an ingenious modification of a classic, but recommended for experienced players only.

Dune 2 is widely thought of as a revolutionary game for the RTS genre.

It was the Wolfenstein 3D of real-time strategy, I guess you could say. The story is loosely based on the books of the same name (minus the "2") by Frank Herbert. You control one of three Great Houses - the noble House Atreides, the insidious House Ordos, or the evil House Harkonnen - in a battle for control of the planet Arrakis, also known as Dune. Arrakis, a seemingly useless desert planet, is home to the most precious substance known to man: The Spice Melange. Without it, space travel would be impossible, and the Imperium would crumble. It is also the home of massive sandworms that attack anything moving on the open sand, as well as the Fremen - native warriors who have learned to use the desert to their advantage.

Overall, I found this game to be very fun. The game play is nice, and the music is very atmospheric (It follows the game play, playing faster music during battles). Although the graphics show its age, they're not terrible, and there are some nice effects, such as craters where vehicles had exploded, and tracks in the sand. Another thing I liked was that infantry units could be trained either individually, or in groups of three, who would move as one unit.

I have a few problems with this game, however. First off, the voice acting is terrible! thankfully, there isn't much of it. Secondly, the units of each house are almost identical, with only a few special units given to each House. Also, while getting the screenshots for this review, I found the control so be a bit awkward. Only one unit could be selected at a time, making it harder to coordinate attacks.

In a nutshell, Dune 2 is an excellent game, despite being a bit old. It's definitely a must-have for all fans of the RTS genre. 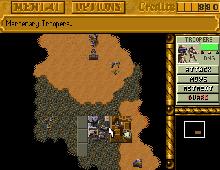