One of the best wargames ever made, period. Since Darren Ingram's review of this masterpiece for CDMag is much more well-informed than mine could ever be, I would like to quote it verbatim here:

"Sure, there are other companies out there who can make a realistic simulation, but no one puts it all together like the designers at SSI do. Steel Panthers, their newest release, is not only fun, but it's realistic without becoming overwhelming, and the graphics are gorgeous. Accurate war sims are often none-too-attractive if not downright ugly, and usually look like a boardgame with cardboard-playing pieces. But SSI has taken a first-rate gaming engine for Steel Panthers and surrounded it by layers and layers of gorgeous SVGA graphics and great sound effects.

This is basically a move and shoot turn-based game with an extremely small learning curve. It's possible for a new player to start playing a scenario almost immediately upon loading the game, but there's enough depth to keep learning new things every time you play.

Each scenario lasts a certain number of turns, and points are awarded to each side for accomplishing things like death, destruction and conquest. But the side with the most points is not necessarily considered the winner. If an army wins a scenario by a margin less than 2 to 1, then neither side will be considered the winner. If one army wins by a margin of ten to one then they're considered victors by a decisive margin, and anything in between is just a marginal victory. So not only do you have to win, you have to win big.

The terrain is absolutely beautiful and units are very sharp and detailed. When a tank blows up, it sits there and burns, which is a particularly nice effect after you destroy an enemy column. When a building is blown up it burns as well, and when a large battle takes place, the battlefield is left in smoking, potholed ruins. For some reason, the airplanes don't quite live up to this graphic standard, popping from hex to hex instead of moving smoothly.

Ironically, the biggest flaw in Steel Panthers isn't even in the game itself. The included manual is not organized well at all, there's no index to help find subjects easily, and they had to append a nine-page readme file on the CD to cover all of the stuff that was either wrong or left out.

When you get tired of playing the same pre-packaged scenarios, the random map generator quickly whips up a map within a set of parameters that the player sets up. And for those who really get into their wargaming, the map editor lets the player create their own map and battles, so the designers have made sure that the player gets the maximum replayability out of this game.

Steel Panthers is one of those war sims that will appeal to anyone who likes a good strategy game, not just to history grognards. It may not be the most sophisticated game on W.W.II ever devised, but who gives a rip? I haven't been addicted to a game like this in a long time." If you are a diehard wargamer or a casual strategy gamer with an interest in tactical-level wargames, Steel Panthers is a must-have.

Another turnbased strategy game played during WW II. Play with your infantry, tanks, ships etc. The playfield consist of many hexagonal pieces on which you can move. In this game you can play real historical scenes, but you can also play against your friend over email. Furthermore, you can make your own scenery with the editorial which is built in the game. 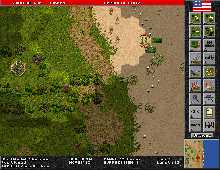 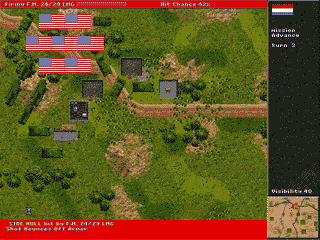