Starclash II is an excellent game of galactic conquest that unfortunately doesn't stand up as well with time as Reach for the Stars. It is a greatly enhanced sequel to Baen Software's earlier Starclash, released in 1980 only for the TRS-80 computers. The game is quite straightforward and easy to learn: your job is to take control of the galaxy by wrestling control from the only opponent in the game, which can be either human or computer-controlled. Create units, deploy them, and watch the productivity level of your empire to fund the war effort. The computer AI is commendable, and the game includes a nice "Intelligence" feature that shows you what the computer thinks your chance of victory is, in percentage terms. You can change many parameters at the beginning of the game to toggle the length and difficulty, such as the number of star systems involved.

The game is definitely not as versatile or complex as later ASCII classics such as Anacreon: Reconstruction, but given the hardware limitations in 1983, it's not a bad effort at all. While it will not hook you for days on end the way Reach for the Stars does, Starclash II certainly is one competent 4X game that armchair commanders will want to take a look. Recommended! 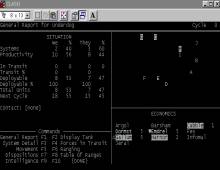