Space Federation (or Star Reach as it is known in the U.S.) is fun action/strategy space opera that tries to combine the furious action elements of Star Control and solid AI of Master of Orion but ends up being merely a marginally above-average game that has nowhere near the appeal or longevity of its predecessors.

Not that it doesn't try-- Space Federation at first glance seems to have it all: attractic VGA graphics, intuitive ship controls that allow you effortlessly switch between different strike crafts in your fleet, planet micromanagement options, and even diplomacy. Each of these modules is implemented well, and there is little you can find fault with when you analyze them separately. The problem, however, is that the whole simply is not equal to the sum of its parts. They feel disjointed together, and the inconsistency is even more pronounced because of the game's real-time gameplay. Having to micro-manage your planets in the midst of a furious space battle, for example, is a little inconvenient to say the least.

Overall, Space Federation tries to be too much, too soon. None of its gameplay elements is as good as its counterpart in classic space strategy games, and the sub-par enemy intelligence and scarcely different alien races only make it worse. Definitely a game whose pretensions exceed its grasp, but manages to be entertaining for a few hours that anyone should spare for trying it out. Once in a while, you'll spot a glimmer of a brilliant game struggling to get through. Unfortunately, that happens not nearly enough. Only try this marginal game if you are really bored of classics, e.g. Master of Orion. 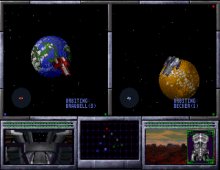