Space Conquest is a fun, albeit very obscure, 4X strategy game from Starsoft and ComputerEasy. The plot, according to description, is as follows: "...[it] is the year 2112. You are the captain of a colonization starship for the Association of Solar Systems in the Neublinn Galaxy, ordered on a routine colonization mission of nine solar systems. But before you can begin your task, you receive a notice that a powerful alien race called the Mancer has entered the galaxy to threaten your position. The AOSS wants you to eliminate them, but in order to pull off this dangerous task, you must enlist the help of new colonies in the galaxy to help ensure your victory."

The game is a cross between space simulations like Super Star Trek and a typical 4X game (think Master of Orion). You will explore 9 different solar systems and colonize up to 80 different planets. Along the way, you will create teams of crew members to monitor and manage colonies, while engaging in battles with the Mancer fleet. One of the game's most interesting aspects is that you must achieve both objectives - colonizing planets and destroying the Mancer - to succeed in your mission. The interface is well thought out and easy to learn, and the VGA graphics is crisp and clear. While it starts out slow, the game is a lot of fun in the later stages once crew and colony management becomes paramount to the game. If you enjoy 4X games or space simulations, you will find Space Conquest a fun, unassuming, no-frills breather in the genre. Recommended! 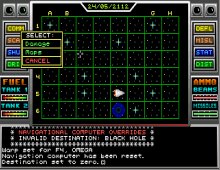