Stellar Conquest III is a fun space strategy war game for one to four players plays halfway between the abstract engine of Reach for the Stars and the more tactical focus of Master of Orion. In this 4X game, you will be able to design their own ships using combinations of cargo pods, lasers, missiles, engines, torpedoes, main-layers, shields, and cloaking devices. You can build cargo ships to mine nearby star-systems to get resources to build warships which are necessary to destroy your opponents starbases-- the ultimate goal in the game. While it looks quite boring graphically with a lot of spreadsheet-style numbers, Stellar Conquest III hides a decent enemy AI, resource management engine, and even some interesting gadgets to put on your ships. An entertaining "beer and pretzel" 4X game that is well worth a look, especially between long sessions of Space Empires IV or similar games. 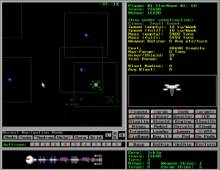