A lackluster sequel to the much better Star Command Revolution, Metropolis' earlier ambitious RTS-in-space, pre-StarCraft era. In most respects, Star Command Deluxe is just your typical harvest-resources/build-army/destroy-enemy-forces RTS game, but there are some innovative features that set it apart. To begin wtih, your success depends on your mothership's survival. Lose it, and you will immediately lose the game no matter how well you are doing. You cannot simply hide the mothership in one corner of the map, either: this is the only unit capable of processing space resources. The importance of the mothership forces you to plan your moves carefully, as well as protect your mothership with heavily-armed units. It also makes the 'tank-rush' tactic common in most other RTS games ill-advised in some instances, such as when your mothership is being surrounded by enemy forces in one corner of the map, while the brunt of your army is about to attack enemy installations in another corner.

Star Command Deluxe supports multiplayer play, but unfortunately only through a now-defunct company-run network. Fortunately, computer AI is competent enough to challenge you for at least a good while. When all is said and done, Star Command Deluxe is not better than StarCraft, but it is a different enough game, with a different enough strategic perspective, that makes the label "StarCraft clone" unwarranted. Well worth a look if you like space RTS with a difference. Basically this is just an average multiplayer-oriented game - play the better prequel Star Command Revolution (also reviewed on this site) instead for a great single-player campaign. 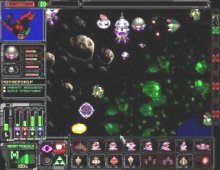