Designed as a spin-off of Star Fleet 2 by Trevor Sorensen, designer of Interstel's classics Star Fleet 1 and 2, Star Legions is set in the same Krellan universe-- but unfortunately legal complications forced the designers to rename the game to this obscure name. It's still a great and complex space wargame, with an even broader scope as you can now control tactical strikes on the planets' surface. Lead the Krellan to victory in an all-out attack. Highly recommended, especially to Star Fleet fans.

Note: Dr. Trevor Sorensen, author of the game, has kindly provided additional information as follows: "Star Legions was never intended as Star Fleet 3. [It] was a spin-off of Star Fleet 2 and was to provide an interim product until SF3 could be completed. The basic premise of Star Legions, i.e., controlling planetary assaults and invasions, was a module of Star Fleet 2. Star Legions just improved upon the concept and made it a stand-alone game, but otherwise it was basically the same." 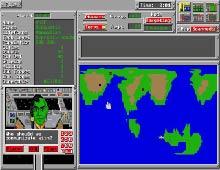