No doubt the most complex space combat simulation games ever released, and one the most complex games in general, Star Fleet 1 packs an amazing amount of gameplay and realism less than 200KB of space. In a plot and gameplay inspired by Star Trek games that were floating around almost every mini-computer and mainframes in late 1970s, Star Fleet lets you command a spaceship and undertake various missions to defend the earth from the aliens Krellan and Zaldron. Every ship system is modeled in meticulous detail-- a must play for all every armchair commander.

The version of the game here is the first official release version by Interstel, after it was incorporated by Trevor Sorensen in 1986. The game itself, however, began selling as early as 1981 by Cygnus, back when it was still a "garage sale" operation. Definitely as must-play for every armchair commander.

Note: The download on this site is the 1986 release by Interstel, which is more or less identical to earlier 1982 release by Cygnus. 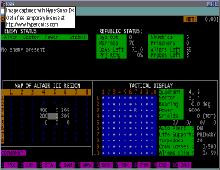