As if Star Fleet 1 weren't complex enough, Interstel outdid itself with the sequel a year later that simulates even more ship systems, with many more commands and a more sophisticated combat model. The added complexity, unfortunately, hurts the game more than enhances it, as many new commands make actions needlessly complicated. Ultimately, the added realism factors take away much of the fun from the already realistic engine of its classic predecessor. 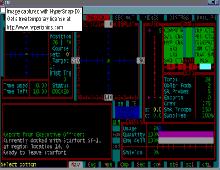