Sid Meier's Pirates! remains to this day one of the most famous strategy games ever made. A lot of people were disappointed when MicroProse released a poor remake called Pirates! Gold in 1993, and felt the game could have been much better.

One fan of the original Pirates! game, Marcel Strbak, decided to 're-program' the original game and add many new features, such as an improved dating options, more realistic weather, the ablility to angle your cannons, and other features. Called Pirates 2, this game is available as freeware. A registration can be obtained just by sending an e-mail, and the game is not crippled in any way. The final version, however, is not yet finished -- the help files are only half complete and the game has funny memory needs that may crash the program on some computers. Once it becomes fully playable, the final version should be a godsend to those who love the original Pirates!. Overall, a great private effort and highly recommended, but keep an eye out for future updates!

Pirates 2 you might think. Microprose only released Pirates Gold after all. You are completely right but a single game developer, Marcel Strbak, decided to make Pirates 2 that features many bug fixes and new game features and general improvements to the game.

In general the game is the same as the original Pirates game from Microprose but the game also features some of the following things: 256-colored graphic, improved "in a city" part, you can use mouse to select destination, smoother scrolling, manual sails and cannons control during fight, new cargo was added - Gun Powder - which is essential for shooting, new ground-battle system like real-time strategy, trading and allying with other ships, more active dating, health and doctor features, you can choose your face and much more.

Pirates 2 is an excellent game with some new interesting features and all of them together makes the original Pirates game even better and makes it more complete even though that was hard to do after the first original game. If you are looking for further info I highly recommend that you read the other reviews of the Pirates games from Microprose here at this site. 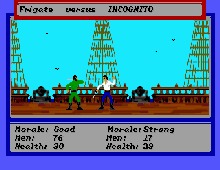