In Startopia's single player game, you play the role of a space station manager employed by various factions to refurbish parts of a network of derelict space stations throughout the galaxy according to whatever these races happen to need a space station for at the time. What this boils down to is basically a ten-level extended tutorial, gradually introducing features of the game to you as you progress towards the final level, direct from hell. It was done back in Command and Conquer, and, quite frankly, in every game with any sort of tech tree that's ever been released. Level one gives you access to sod-all of the tech and is easy, level-the-last gives you the whole tech tree and about ten different opponents, all waiting to destroy you. It's a standard formula, seen countless times before and the game was soundly criticised for following such a standard, but worse, short, single player campaign.

Having played through the game to the end, I'm very nearly inclined to agree, except for the fact that the game is so incredibly well-realised. Your assistant, VAL (Ha! Like the computer in 2001, only not. Very clever) is voiced by one of those incredibly talented people that you can't put a face, name or history to, but is nonetheless brilliant and instantly recognisable as... someone. The trader Arona Dahl is similarly perfect in his role though his accent does switch between something that I think is British Jewish and London (Laahndan). The aliens who inhabit the station don't have voices as such, but the sounds they make are appropriate and even manage to sound relevant, quite an achievement for a series of unintelligible grunts. Each race has many animations for the various actions they perform in and around the facilities of your station and, as a whole, I think they're one of the game's high-points. You can certainly see the influence of the humour and thinking that was put into the creatures of Dungeon Keeper and the diseases of Theme Hospital at work.

The same effort and attention to detail was obviously put into the structures and facilities of the game. Opening the build menu meets you with a straight-from-Theme-Hospital-interface, drag out a room, place the doors, fill the room with the necessary equipment for it to work, add any extras, build, which works fine apart from the odd interface glitch that can see you accidentally removing room items and having to put them back. As an example, the laboratory (again, straight from Theme Hospital) needs an Analyser, a research station of some sort and a door. That's all it needs, but I'll often add in a couple of clocks (brilliantly set to your PC's own clock time), a TV set (helpfile entry: "This is your god"), some lamps to light up the dark corners of the room and maybe the odd plant pot which can be later filled with a plant from the station's Biodeck.

The Biodeck, incidentally, is one of the best executive toys I've ever seen. Basically, it's a completely malleable landscape that can be set to any height or depth to create whatever countryside you like, which can then be set to any sort of climate you like. Then you can add realistic water to flow into any pools you have created. The Biodeck is literally so simple to use that you can take a barren desert and turned it into an arctic hillside, or created an island paradise in the centre of an ocean. Or you can have a patch of desert in the middle of an artic island inside a tropical ocean... or something. It's all up to you, really. The Biodeck is essentially your station's food supply, but many other things (Hardware Items, Black Market Goods, Alien Artefacts) can be grown there, depending on the climate; as well as this, it doubles as parkland for whatever tourists your Leisure deck has attracted to your station, and, with the right people working for you, can act as the base for your church, potentially the most lucrative aspect of the game.

My counter tells me I've used up 800 words on the game so far and I know that I've barely scratched the surface of Startopia. I haven't mentioned the Scuzzers, warfare or the Oroflux yet, nor have I mentioned the fact that Startopia is one of the rare games with a worthwhile soundtrack, to the extent that you'll find yourself hanging around on certain decks of the station because that's the deck they play your favourite tune on; but none of these really need to be mentioned, I hope, to convince you that Startopia is a beautifully intricate jigsaw of components that combine to make up one of the more thoughtful, varied, games out there which, despite its "only ten levels" single player campaign (don't be fooled, by the way. They're pretty long levels), actually has the staying power to lure you into dedicated skirmish mode play or, dare I say it, multiplayer mode (I've played multiplayer Startopia and I don't play multiplayer anything). 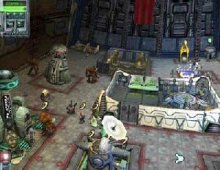