Spellcross is a fun but sadly-ignored turn-based fantasy/sci-fi strategy game that is well worth attention of both fans of Warhammer 40K: Final Liberation and Emperor of the Fading Suns. In this unique strategy game, you are John Alexander, a post-apocalyptic commander who must - you've guessed it - save the world. From game description at the official site: "... [the] game is split into two levels - strategic and tactical. In the strategic part, you decide on the most suitable territory for attack, the division of financial resources, the composition and organization of the army, and the direction of research. In the tactical part the actual battle within each territory takes place. During the battle, you have to allocate a specific number of action points per unit, for moving, attacking or other special activities." Games Domain says it all about this underrated gem that deserves their Silver Medal award:

"Spellcross deserves credit for balancing play, and (possibly unknowingly) setting standards for other games of its type to follow. Like Final Liberation, as each new sector falls under your control, resources are gathered from that newly acquired sector. However, the resources can only be exploited for a limited period of time, forcing the player not to play a defensive game but to gather a mountain of resources to whomp the enemy AI with. This also forces the player to critically consider where to expend the resources gathered before they run out.

The research portion of Spellcross is another aspect of this game that really surprised me. Along the lines of XCOM, research will open new units and technologies to choose from. In addition, Spellcross tweaks this aspect by adding the ability to modify existing units and give them better weapons and armor (as well as the ability to upgrade them into entirely new units). This aspect allows you the option of customizing certain units, making them that much more personalized. My Commandos are decked out with the full selection of weapons and armor. I also enjoyed other small touches like the ability to destroy, and walls within combat.

[In] many ways, it's the best turn-based sci-fi strategy game of its type. It has more depth and complexity than Fallen Haven... It was also much more engaging than both Deadlock and the sequel (the AI is much more aggressive and intelligent, too). Spellcross is more challenging than Final Liberation, with a better balance of resource management, more options, and again a much better and more aggressive AI. In fact, I can't think of a better game of this scope (Master of Orion and its ilk are on a different scale and style). Spellcross in many ways sets an example that other developers creating on this scale should look to...

Despite the few bumps in design (such as movement and save game implementation) and being DOS based Spellcross is a game worth our shiniest silver medal. In fact, Spellcross is the title gamers should look to when games like Deadlock 2, Fallen Haven or Final Liberation failed to meet expectations. Truly a great injustice considering US gamers will never see the title on their store shelves, and likely have to resort to overseas shipping to see this gem." 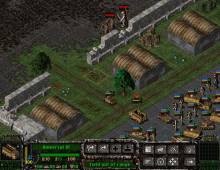