Space Monopoly is a neat clone of Sid Sackson's classic Acquire board game with some new twists, although I could find no mention of Acquire at all in the game - which could be either a simple oversight, a sign that the designer doesn't want to credit Sackson, or simply a fact that he is unaware of Acquire. Whichever the case, this is still a fun multi-player business game. The official rules: "You start the game with L6,000, and when companies are created you can buy shares in them. As companies grow and merge with each other you will get more money. It's as simple as that. At the end of the game the player with the most money left (including the worth of their shares) is the winner. The game can be played with as many people as you want, but 2-4 is the recommended number."

You will need to grab a friend or more to play against you, since there is no computer player in the game. That isn't necessarily a bad thing, however, because the game mechanics are a lot of fun. You can create companies, grow them (thereby increasing their share value), buy and sell shares in them, and take over smaller companies. As in real business world, creating big companies with as little cost as possible is the key to success. If you enjoy Acquire or abstract business games in general, Space Monopoly is well worth your time. 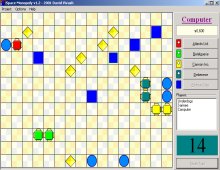