This is the BEST solitaire game I've ever played, period. The game not only has the standard single and tournament play, but also two original concepts called "quest" and "journey" which are similar to tournament, but with more interesting rules and incentives. With over 100 types of solitaires to choose from, "quest" mode, and a complete player history, it's no small wonder QQP can stuff all this into less than 1MB of space. 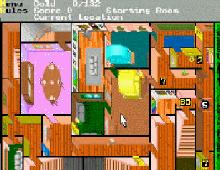