One of the most famous computer chess engines ever created, Socrates 3.0 is the engine behind EA's underrated Kasparov's Gambit and was, in mid '80s, THE engine commonly considered the best chess AI ever created. Although it has since been eclipsed by more modern programs such as Deep Blue, this computer version of Socrates does justice to the engine's fame, offering multiple levels of difficulty that will challenge even expert chess players. The game is a very straightforward chess game in that it lacks "bells and whistles" such as historical match database and alternate chess pieces common in the "mainstream" games such as Chessmaster series. This means that the game will likely be too "dry" for casual players, and downright discouraging for beginners. Expert meistros who want a real challenge, though, will find the game very challenging -- with a world-famous chess engine that stands up well with time. 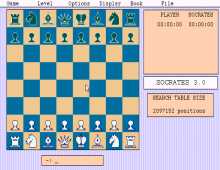