One of the best games from Capstone (and given their miserable track record, that is saying a lot), Grandmaster Chess is an innovative chess game that sadly received far too little recognition in its time.

To compete with the dominance of Mindscape's Chessmaster series in home computer market, chess developers tried different approaches to differentiate their games from Mindscape's stable. Interplay tried animated pieces in Battle Chess series, while Capstone focused on "neural network technology" and an AI that was supposed to learn from mistakes. Grandmaster Chess is one of their best results - a game that looks good (it offers both VGA and SVGA modes) and plays an excellent game of chess. The AI does seem to learn from mistakes as far as I can tell, as it does not repeat the mistakes it made in the first few games. But mind you, my puny chess talent only allows me to beat the game on one of the easier settings, so your mileage may vary. Anyone who wants a solid chess game that represents a different and innovative approach than Mindscape's familiar classics should definitely give Grandmaster Chess a serious look. 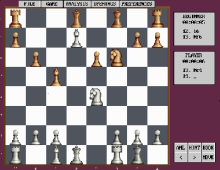