In addition to running on one of the strongest chess engines ever made, CCS is also the world's first commercial chess software to include a respectable collection of historical games, some database capabilities, and a very pretty interface (one step behind Chessmaster in the graphics department, though). And to beat the chess engine is not a piece of cake. For example, on a Pentium 200, CCS scores 2160 Elo on the LCTII test. That is equivalent to the around 2000 Elo of the computers that were available in the year of the game's release. (For anyone who has no idea what I'm talking about: Elo is a mathematical system used to rate chess players, invented in the 1960s by Dr. Arpad Elo. Some typical Elo ratings are: 2800+ for a World Champion; 2300+ for International Masters (IM). Read this interesting article on how to estimate IQ from Elo rating and vice versa).

Overall, novice players who are used to Software Toolworks' popular Chessmaster may be intimidated by CCS. But for a real, no-nonsense game of chess with all the frills, including a great database of historical games, CCS is simply a must-have. Highly recommended! 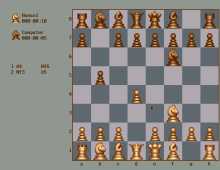