Shadow Watch is a fun, albeit short sci-fi tactical strategy game in the same vein as X-COM that offers some original ideas that make up for the short length, slow gameplay, and none-too-bright AI. My most favorites are the nice comic-book graphical style that is executed very well and gives the game a unique feel, and the innovative addition of RPG elements that are similar to Commando, but done much more effectively. Each of the 6 operatives that make up your "Shadow Watch Force" has unique skills and roles that add to the puzzle element. For example, you have to use a certain character to sneak around, and another to assassinate someone by sniping. The nice review on MobyGames explains the rest:

"The game was quite fun and replayable. Everything was finely tuned and balanced, at the micro level in battles as well in the pacing of the campaign and the character development. The combination of randomization and player choices allowed for the same maps and basic scenarios to combine into several unique storylines (roughly 36 different possible campaign plots, differing in which sides were friendly and enemy on each map as well as in the overall story). The action-point system was quite different from the norm for such things, with only 5-10 APs per turn per character and generally each square of movement counting as an AP. Very tactically rich, with morale, adrenaline, opportunity fire, observation and alertness, and character special abilities all included.

The campaigns were a hair too short overall, both in the resulting playtime (roughly 20 hours per campaign playthrough) and in the number of scenarios before the final battle - if you wanted to have all your characters fully developed for it, you needed to choose missions based on their character development potential rather than the story.

The Bottom Line: [Shadow Watch is] a unique and original take on the tactical RPG, with some interesting game mechanics that work quite well. I remembered it so well that I recently dug it out and played it all over again on my WinME box last year. I'd recommend giving it a try to any tactical RPG fan." 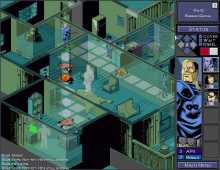