Games Domain's Dean Gordon says it all about this atypical squad-level wargame that does not live up to Stanley Associates' earlier 5th Fleet, primarily because it is too short and too easy:

"The United States Marine Corps (USMC). What image do these words conjure up to you? To me, it speaks of soldiers who will do anything, anytime, anywhere. Soldiers who like knowing that they are the ones called upon when the shit has hit the fan. The USMC is an elite fighting force, a miniature army complete with its own integrated ground, sea and air elements. As such, it is surprising why so few games have been Marine-based, as it should be a prime breeding ground for kick-ass games. Enter into the breach Interactive Magic's Semper Fi.

There are two main strengths to Semper Fi - command and control and fire and movement. The game abandons the strict igo-ugo concept in favor of initiative- based action phases. Who goes depends entirely upon the real-world quality of each side's troops, their readiness and the initiative taken and its success in the last move, which is an exceptional system especially when coupled with the opportunity fire ability. Opportunity fire occurs when an unit is moved into an enemy's line of vision and Semper Fi does a nice job in putting forward realistic damage during opportunity fire (line of vision can be hampered by the terrain and by previously damaged units). Suppression is also present and is handled by morale drops and inability to fire. Each unit fires independently and the command and control HQ leadership range effects each unit's fire and movement initiative. An unit outside the HQ range will not fare overly well. Each unit also has a finite ammunition capability which adds a lot to the realism in the game (it is replaced between missions in a campaign game). Each unit has main and small arms firepower though, so once you run out of your main explosives you can still do some small- arms damage (though it is very, very limited and really only useful for close assault defense against a soft target). Semper Fi also creates realistic mortar fire which is a very nice touch (mortar fire is effective in open terrain and fairly useless in urban situations). Off-map indirect fire is also available.

There are 15 scenarios and three campaigns (Korea, Kuwait and Pantelleria) available on disk, with each game turn representing about six or seven minutes game-time. The scenarios with each campaign are linked but there is no soft-target carry-over (units that were destroyed or partially destroyed are brought back to full strength). Hard targets carry-over only in the sense that units that suffered casualties but were not destroyed start the next scenario at the same strength at which they ended the previous mission (destroyed units are replaced). When you get through the fifteen scenarios and the three campaigns (about a week's worth of playing), there is a full-featured scenario builder and map editor to allow gamers to roll their own. One aspect of the game must be pointed out as being exceptional and that is the AI editor. With most games you are given an abstracted variation on the easy/normal/hard game setting. Not in Semper Fi. You get a full-blown AI editor which is fully tweakable, giving you an AI that is as smart as you want it to be. This is one aspect of the game that I wish all developers would include.

As a strict ["for grognards only"] product I considered giving Semper Fi a Silver Medal given its good (and completely tweakable) AI, good terrain maps, well-done command and control/ fire and movement aspects and the ability to roll your own scenarios. However, the laziness by Balkoski and Stanley Associates in regards to the number of available scenarios and campaigns really cheapens the product. As a cross-over wargame I have to question releasing Semper Fi as is. If the competition (Napoleon in Russia, Gettysburg) can release products that retain the gameplay grognards demand and couple it with the eye candy and multimedia that general wargamers want, why couldn't Semper Fi? As is, the game has some great gameplay aspects but feels and plays unfinished. For the hard-core amongst us though, there is enough there to sate your hunger until TacOps 98 is released." 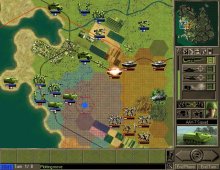