Second Conflict is a fun "beer & pretzel" style game of galactic warfare for Windows, and one of the first shareware strategy games that are worth the registration costs. Sequel to Galactic Conflict, the game was released as freeware in late 1990s by its author, Jerry Galloway.

Second Conflict is not a typical 4X game (or even strategy game for that matter) because it lacks three important characteristics of this genre: research, diplomacy, and fog of war. However, the absence of these components are clearly by design: the game is quick space war game that can be finished in a few hours. You can compete with up to 9 other players, any of whom can be computer-controlled, in 6 preset scenarios or an unlimited number of random scenarios. The game is easy to pick up and enjoy-- one of the things I like the most is the number of fun options in the game. You can, for example, define the initial strategy for computer players. Want your opponent to be more aggressive? Cautious? You can change it with a mouse click. You can also change victory conditions, set the number of factories and planets, and even set reinforcements or attacks in progress when the game begins. This means you can create a "white knight" scenario where you play the knight (or in this case, the commander) valiantly charging into battle to defend a planet as its defense systems are failing. Fun, and a great way to boost self esteem ;)

Gameplay is otherwise identical to other 4X games, except that it's much more transparent and easy to learn than most. At the top of the screen, you can see the current morale level of your galactic empire, current turn number, as well as current odds for both ground and naval attacks. Although there is a limited number of units you can produce and no research possible, the units are more than adequate as the focus is on strategic-level planning rather than tactical combat. Both space and planetside battles are resolved quickly based on statistics of both sides. You can send military units to attack, probe, or resource raid missions. The computer players provide a decent challenge in anything above "easy" difficulty level, although it's still much more fun to play against human friends (only hotseat is supported, unfortunately).

With a quick & fun gameplay and excellent user interface, Second Conflict is well worth a look for anyone who wants a quick, no-frills galactic war game. 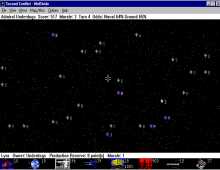