Robo Rumble is a decent real-time strategy game (in fact, one of the first 3D releases) that features some new concepts to the tried-and-true genre dominated by Westwood's Command & Conquer series. The game is set on a partially terra-formed Mars at the end of the 22nd century. When Mars was being evacuated, an exploration team found an abandoned alien cannon aimed right at Earth, and discovered the fact that the aliens planned to return in one year to use it to destroy Earth. Strangely enough, your job is not to defend the planet, but to win the defense contract for when the aliens come back. You control either Red Star or Terraflux, the two competing arms manufacturers, going through a series of missions, designing and testing more advanced 'Robos' to further your objective.

While not an instant classic, Robo Rumble offers some interesting ideas to set it apart from other RTS. Instead of acquiring/mining resources to build your units with, Robo Rumble gives you some money at the start which can be used to spend on making units. When your units die in battle, you'll get the costs of building them back. Between missions you can buy parts for new robots in a conversation-style interface. Each mission is typically over when your units destroy the enemy's base (which looks like nothing more than a black hole the enemy units come out of).

Graphics is definitely one of Robo Rumble's strong points. The game has some great lightning effects, detailed background graphics, and nice 3D card effects. Unfortunately, when all is said and done the game is nothing more than a combat-intensive RTS without much emphasis on strategy, where each new mission looks remarkably the same as the last. Robo Rumble is not a bad game, but it could be much better and deeper with more gameplay options and mission variety. As it stands, it might appeal to action gamers who want some strategic elements in their game, or RTS fans who are looking for a more arcade-oriented title than Kohan. 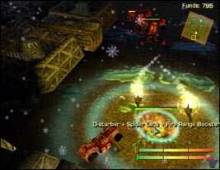