One of the most innovative real-time strategy games to have come along in a long time, Rising Lands is a good game that is hampered by a few idiosyncracies and an inconvenient user interface. The review at Games Domain explains the premise and gameplay mechanics quite well as follows: "[the] premise of Rising Lands is quite topical - at least in movie terms - with the impact of a comet on the Earth sending civilization back a few thousand years. Out of the devastation arise a number of tribes, each set on being the leading power in the post-holocaust era. Your role as leader of one of these tribes is to steer your people through a series of campaign missions while developing research in military, engineering, farming and magic disciplines. The general theme of this real-time strategy game may sound all too familiar, yet it has a few innovative elements that add to its strategic nature. The quality of the graphics and animation is also strong, but unfortunately there's a few areas where an otherwise good game design falls a little flat. As you begin the campaign you only have limited knowledge of farming, military and engineering skills - each mission gives you the opportunity to make a couple of discoveries, provided you build and man a research lab during the mission, and you choose which of the technology paths to focus on for the mission. You can focus on the military, to get (for example) flamethrower and tower defence units, or you can research farming methods to ultimately allow you to make more efficient and speedier use of the farmland around you, or you can focus on engineering to allow you to build such things as vehicles and balloons. Later in the game magic becomes available for research, from which you can train druids and cast spells. Thus the tech path you choose in the campaign affects the tactical options open to you in each mission, and with 15 or so technologies per tech path, that choice can make a difference. In addition to carrying over tech knowledge between real-time missions you also carry over relationships with other tribes, so if you make peace with the red tribe in mission 4, you'll start mission 5 at peace with them too. Winning via peaceful methods is sometimes possible, and the more allies you have, the better. There's a definite feeling of continuity between missions, but sadly there's no convincing plot line to suck you into the game world. Mission goals are presented in a rather sterile fashion, which is in contrast to the colourful presentation within the real-time element of the game."

With a great premise and very intriguing blend of empire/micro- management (think The Settlers), real-time strategy fare, and historical context of Ultimate Domain, it is a pity that the interface in Rising Lands is not as user-friendly as Warcraft or other classics. You need to make a lot of left-clicks to order the units to do your bidding, and sometimes there is simply not enough time to do that when the enemy's armies are approaching. However, unlike most game reviewers, I feel the game's strong points more than outweigh the cumbersome interface. There are simply too many good ideas here, even if not all of them are implemented well. For instance, you have to make sure your units have access to enough food, or they will die. Hunger will also drive your units to abandon their post to find something to eat - a very nice nod to realism that adds a whole new layer to gameplay. You can also trade resources or people with other tribes by the use of markets and special "exchange" buildings, and you need to train messengers to initiate trades and pacts. Like all good 4X games, research is very important in Rising Lands: you get access to balloons and other cool units with enough research.

All in all, if you enjoy innovative RTS games and are willing to put up with both a non user-friendly interface and high difficulty level, Rising Lands is well worth your time. Similar to Gangsters series, it's one of those games that will grow on you once you get over the initial annoyance of having to put up with the interface until you are used to it. Highly recommended and a top game in my book, but definitely not for everyone. 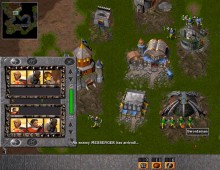