Rival Realms is a little known but highly underrated real-time strategy game from Romania-based developer Activ-Pub, published by Digital Integration in the UK and Titus elsewhere in the world. Games Domain's review says it all about why RTS fans should take a look at this obscure game:

"There are three races included in the game. The characteristics of each race are consistent with previous fare. The Elven race has the advantage of magic, technological innovation, and ranged combat. Elves are weak in up close combat. The Greenskin race seems to be a catchall group of Orcs, gnomes, and anything green. They are primitive and resilient in close combat. The Human race, as is the norm, lies between the two races. They have average magical skills and are adequate at both ranged and close combat. Each race has 14 different unit types and 12 base building types. Rival Realms includes three types of games where the races battle for victory. The campaign game includes a separate game for each race with 20 scenarios for each campaign for a total of 60 campaign scenarios. Custom games can be played as single player scenarios using the Scenario Editor included with the game. Multiplayer games can include a combination of up to eight human and/or computer opponents. The multiplayer and single scenario games are where realms come into play because you can have similar races battle against each other. The campaigns require that you choose a specific race.

What sets Rival Realms apart from most RTS games is unit innovation. Each unit has a set of troop attributes that rank speed, damage, latency (weapon reload time), accuracy, and armor. Ground troops have an individual inventory with four pockets that can be filled with items. Friendly troops can also exchange these items. There are 21 different artifact items that troops can acquire that are divided into armor, damage, life, magic, and speed general classifications. Troops gain experience through combat and training. They can advance up to five levels (or five stars) and each level increases the damage and durability of the unit. They also receive a special item when they reach the first, third, of fifth level of experience. Spellcasters, for example, will receive a magic scroll with a new spell. Upgrades can be purchased at buildings or sometimes the upgrades will be provided for no charge. These upgrades consist of special items or new abilities.

I must admit to being shocked and surprised at how much I enjoyed Rival Realms. This game does not neatly fit into any particular category. On the surface, it appears to be merely a Command & Conquer or Warcraft with fantasy elements and twists. Playing the game reveals a much more satisfying game than I could have imagined. The early scenarios really have a Heroes of Might and Magic feel to them. You stumble upon chests that contain various upgrade items and can increase your character's abilities at various buildings. What gets this game my enthusiastic recommendation is the campaign set. There are an unbelievable number of scenarios for one game. Rival Realms could have been packaged with one racial campaign and the scenario editor and been a pretty complete package. Yes, there are some problems controlling the troop masses and sometimes units wander off in the wrong direction, but I can overlook these problems because the game is so much fun to play.

I cannot overemphasize enough that if you are a fan of the HoMM series, this game should be on your purchase list. If you remove the units showing up at the end of the week and add real time combat and resource gathering, then HoMM becomes Rival Realms. Some may not be willing to overlook the resource gathering aspects as too real time strategy game-like, but I enjoyed every minute playing Rival Realms. It has HoMM's rule simplicity coupled with HoMM's strategy complexity. No, you cannot summon creatures, nor does the spell system have HoMM's depth, but it has enough to keep you entertained." All in all, a great first effort by Activ-Pub, and worthy of at least a play through by every RTS fan. 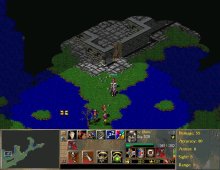