War Wind II: Human Onslaught is a great sequel to one of the most underrated RTS games of all time. PC Gameworld summarizes the game?s strengths and its unfortunate treatment by the gaming public in a nice, comprehensive review:

"SSI?s War Wind series just can?t seem to catch a break. When the original War Wind was released, it faced an uphill battle against charges that it was a WarCraft II rip-off. It didn?t help matters that it was a WarCraft II rip-off, but for those who dared try it, War Wind revealed superior gameplay and enough new elements to actually make it a better game in many respects. Now War Wind II: Human Onslaught rolls into town just in time to be ritually disemboweled by a public buried under inferior real-time strategy games.

That?s a shame, because, as with the original, War Wind II is a rich and rewarding game. The story begins after the battle for Yavaun, with the Tha?Roon reasserting their power over the Obblinox to form the Overlords. The other sides in the war, the Shama?Li and the Eaggra, have also united to form the Servants Under NagaRom (S.U.N.). As the war continues, a group of scientists and their Marine contingent unearth a mysterious slab on far-away Earth. As they study this relic of NagaRom, it activates, transporting the scientists and marines smack dab into the middle of the final S.U.N. / Overlord battle. As the sides fall back to regroup, the humans split into two armies. The human scientists, known as the Descendants, merely want to return to Earth, while the Marines want to seize the opportunity to form a new nation on Yavaun. These four groups make up the combatants of War Wind II.

Campaigns can be played as each of the four major groups, with different missions and challenges that take place across four dozen maps. The blend of alien races (Obblinox/Tha?Roon and Shama?Li/ Eaggra) make for interested combined unit warfare, especially when faced with the traditional combat forces of the human onslaught.

As you would expect, each side has its own unique strengths. The Marines have superior firepower, the Overlords have brute strength, the S.U.N. has magic, and the Descendants have technology. Aside from the four campaigns, there is a full tutorial and a potent map and scenario editor. Multi-player support allows for four gamers over LAN or TCP/IP and two over a direct connection. A number of multi-play scenarios offer a variety of challenges, such as building forces from scratch, starting with a large force, racing for a marker, and team play.

Controls and gameplay are as expected from a real-time strategy game; you build a compound, then create forces to defend it and fulfill the mission goals. Resources are harvested for raw currency, and butanium is gathered and refined to power machinery. On advanced settings, supply points must be allocated each turn, adding another level of complexity. However, War Wind II steps beyond these familiar ideas by adding a strong element of roleplaying. Missions are not all of the "kill ?em all, let god sort ?em out" variety (at least, not usually). They are more complex, with an almost puzzle-like structure that requires various steps and careful planning.

Each side can choose a leader for the campaign, and this leader must be protected at all costs. In the course of a mission, units may also be trained and upgraded to improve their performance. Spells, cybernetic enhancements, and vehicle upgrades can all improve your core units. These core units may then be placed in the Hall of Heroes and carried from mission to mission, along with any goodies they pick up (such as potions and bombs). In any given mission, your leader may have three or four tasks, such as meeting an informant, picking up supplies, and then dropping them off at a given location. Since Yavaun is crawling not only with the opposition, but also with a large variety of both benign and hostile animals, combat becomes a part of every mission. As often as not, however, combat and the complete destruction of the enemy is not the sole objective.

War Wind II can stand alongside many (and above most) of the current crop of real-time strategy games, despite a few problems. The maps are very cluttered and not as sharp as, say, Dark Reign. The complex nature of the many orders each unit can perform can be a little bewildering, and the interface is a bit funky. Selecting and deselecting units is a real pain, since each unit you click with the left mouse button stays clicked until deselected with the right. This means you?re always forming groups that you didn?t want to form. Once you get past these niggles, however, you?ll get a lot of entertainment out of War Wind II." Highly recommended, especially to anyone who enjoys the original, or fantasy-based RTS in general. 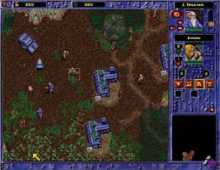