A somewhat different but good strategy game where you are the leader of your own gang. The story is pretty much the traditional one where you have to succeed in different missions and then get the "real" mission. On your way to succeed you will have to get different supplies by looting cities, fighting against other gangs and much more.

The interface is very simple and all commands are done via your keyboard as mouse control wasn't really a standard back when Roadwar 2000 was made. The graphics aren't that good, but compared to that time in 80's they are acceptable. The game doesn't have any sound which also affect the overall atmosphere in the game in a negative way.

This classic SSI game was available on the IBM, C-64, and Apple, and the IBM version is not the best. Still, its a fun and unique game that is both simple and yet addictive at the same time.

The plot is that in the year 1999 (which, I know, has already passed :) ) a terrorist group unleases a deadly virus on the United States and the country collapses. You control a road gang that is trying to take over cities and survive the harsh world. Do well enough and you'll be contacted by the government and sent on a quest to find eight missing scientists and bring them back to a secret base. You move the gang around on a map of North America and have to loot cities for needed supplies, engage in gun battles with other gangs, and fight detailed tactical road battles to capture vehicles..Good EGA graphics for its time and no two games are quite the same. Downsides are no sounds, easy to die at the start of the game, and unrealisitc features in the game (such as how gang combat in non-tactical battles is conducted). Despite these flaws, this is a great game that should have received more attention then it did. 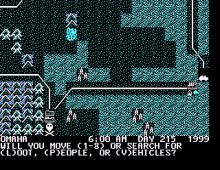 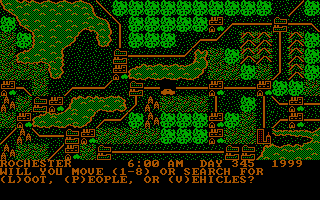