Rise and Rule of Ancient Empires

Rise and Rule of Ancient Empires is an ambitious Civilization-style strategy game from Impressions/Sierra that unfortunately falls flat from uninspired gameplay and poor AI. Tim Chown's review for Games Domain makes clear what is wrong with this marginal game:

"Perhaps the first indication of the game's intention to be historically inaccurate is that the default leader of the Greeks is Homer, a man not quite in the same league for world conquest as Alexander the Great. Rise and Rule offers six nations - Greece, Persia, China, Celts, Egyptians and Indians, each with supposedly unique advantages in one or more of five areas of knowledge - general, sage, martial, medical or engineering. The aim of the game is to take your initial settler, build a city, and expand via military, science, trade and philosophy until your empire is the sole one left on the map. A premise used to good effect elsewhere, but Rise and Rule sinks because of a clumsy game interface, a sloppy manual, dull gameplay and a lack of depth which makes playing a chore rather than a pleasure.... Sadly, I think Rise and Rule is best fed to the lions; it doesn't have enough depth as a "sim", there's no real meat to the strategic combat, and too much of the gameplay is "samey". The computer opponent is competent, but then the AI doesn't have many complex things to consider in its planning." Try it only if you've played Impressions' much-better Caesar 2 and are wondering why Rise and Rule, which was released by them around the same time, remains a much more obscure title than its illustrious cousin. 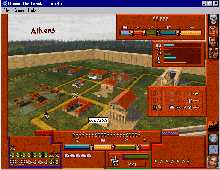