Red Lighting is SSI's explosive depiction of the potential war in Europe between NATO and the Warsaw Pact. As the Soviet player, your mission is to sweep aside NATO and capture the Ruhr. As the NATO commander, you have the more challenging task of repelling the invasion - while attempting to maintain the alliance in the face of the mounting casualities. Painstaking military research by the game designers makes this simulation as advanced as the weapon systems used in modern land and air combat - sucs as the Soviet t-80 tank and the U.S. F-117 Stealth Bomber.

Any Soviet aggression will surely extend to Norway, Iceland and the North Atlantic. The battles in these regions greatly affect the outcome of the war in West Germany and are fully accounted for in this game. Three sceneraios, five difficulty levels and multiple options challenge the avid wargames to explore the myriad possible outcomes should World War III erupt!

"A simulation of World War III in Central Europe. The game had some interesting concepts (e.g., forward deployment of subordinate units albeit at a cost of added fatigue), but the user-friendliness/clumsiness of inputs was so awkward as to make the product a tedious chore rather than an interesting or enlightening experience." 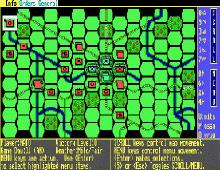 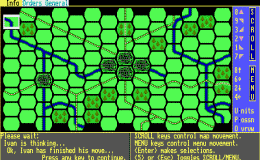