Landrey and Kroegel's second Civil War game after Shiloh is identical to its predecessor in every respect except for the battlefield. Rebel Charge at Chickamauga is slightly more difficult than Shiloh due to immense odds that the Rebels face. Overall, only a slight improvement on its predecessor, but Landrey & Kroegel fans will find much to like here, despite a dubious AI and strange ahistorical results that may occur. 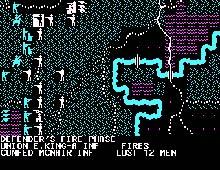 People who downloaded this game have also downloaded:
Shiloh: Grant's Trial in The West, Sons of Liberty, Gettysburg: The Turning Point, Pacific General, Battle of Antietam