Shiloh: Grant's Trial in The West

"SSI's first rendition of Civil War, The battle, it was a true "beer-and-pretzels" type of game. Easy to learn and play, it was marred by marginal graphics and ahistoric results. The "edge of the world" map syndrome ruled here as it was the preferred method to fix and destroy the enemy." It was also a more accurate rendition of the Battle of Shiloh than the 1981 game SSI first released on Apple II. 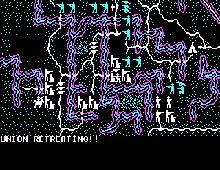