Qianhong is a good and free Chinese chess game for Windows. The author calls the game "Chinese chess for the casual and curious," and this description fits Qianhong quite well. The well-written and concise on-line rules explain all you need to know about the basics of Chinese chess. Attractive graphics, availability of a Western-style iconic character set for the pieces (as opposed to typical Chinese characters), and an easy-to-use interface help draw beginners into the game. Although the program has relatively weak AI when compared to commercial Chinese chess programs, it offers the ingenious ability to install "AI plugins" coded by other programmers to augment the game (you can already download some of these from the official site). In addition, Qianhong can display the game's moves in WXF or ICCS notation, lets you review each move you made, and save the games in WXF format. Similarly, you can also view WXF and ICCS format game files and start playing a viewed game from any point in the game. Last but not least, the game lets you edit the starting piece positions to create puzzle situations or to practice game endings. All these features, and the fact that the game is continually being updated by its author, means a very good choice for anyone who is interested in Chinese chess but never had a chance or found an easy-enough program to try it out. 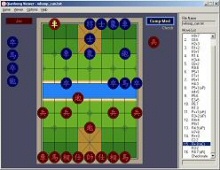