Definitely one of the best freeware wargames ever made, People's Tactics is a great hex-based, turn-based war game that rivals many commercial games in terms of quality and AI strength. The quality of the game is so high that Wargamer.com, a respected on-line wargaming review site, wrote up a thorough and glowing review which I have excerpted below:

"This abstract strategic level game with a World War II flavor is so well done that some publishers have offered to give it a little polish and put it on the market. However, Reijkersz turned down these offers because he said at the outset the game would be freeware and he wouldn't renege on his promise. He also doesn't feel - not altogether rightly in my opinion when I see what passes as professional games - the level of his creation is not yet commercial. The quality of the game and such integrity deserves a full-blown review.

At first blush, People's Tactics interface appears clean and simple. Selection and movement are done by left clicking and operations such as attack, fortify, and airdrops as well as administrative options like form new units, production, research, diplomacy, and changing officers are accomplished through either icons or hotkeys. However, completions of these tasks often require several clicks. For instance, creating a new unit requires selecting a strategic HQ, ordering a new unit, selecting its type, selecting its superior tactical HQ, re-selecting the strategic HQ, calling the transfer function, selecting the new unit, and then transferring troops and equipment to the new formation. Choosing the units involved in an attack is counter-intuitive. First, the target is selected and the attack function is called. Then, attacking units are clicked on, not on the map, but in the terrain information box. All of this makes perfect sense for gameplay and becomes second nature after a while but could aggravate newcomers. Simpler ways to do these tasks should be developed as well as a mouse auto-scroll for the map. Fortunately, the complicated operations do not need to be done every turn.

The territorial keys for this game are cities. Not only do they yield the victory points needed to win the game but cities are also vital for supply, production and political points. A nice map creator allows players to create any historical or imaginary setting they want. Many of the scenarios provided have World War settings. Combat units - even air and naval - are battalions. Battalions can be made up of up to four components, transport, infantry, artillery, and armor. These units are rated for readiness, morale, supply status, weight, movement, and movement type in the unit information box. Units' attack and defense factor are shown on their map counters. Crucial to a unit's performance is its commanding officer. Officers have values for renown, retreat, and land/air/sea skills. Foremost among these is retreat as that value is the percentage of casualties the unit has left before a retreat is ordered.

The political points gained from cities are vital in many ways. They buy fields in the research ladder, providing better units so that players can have over 35 types. Political points are also spent in creating new units and headquarters and are also necessary in the swapping or sacking officers. The simple diplomacy elements of making peace and declaring war are functions of political points, too.

People's Tactics may look like an old simple boardgame but play is far more intriguing. Chain of command is the key to overall success in this game. Uninterrupted lines must run from combat units to tactical HQs to strategic HQs to cities in order to maintain supply. The ability of cities to move men and equipment to strategic HQs is also dependent on the length of open lines. These lines can be blocked by the presence of enemy land units. Given the importance of supply lines and the occupation of cities, mobility looms large as a factor in the game. Paratroopers and amphibious landings allow players to get fancy but the nut of the issue is trucks. Trucks can be used to provide organic transports to new units or they can increase a strategic HQ's ability to move reinforcements to existing units. Sea transport faces the same conundrum. So, unless players have enough cities to dedicate one to truck production, each turn will call for a decision on mobility.

The AI can be opportunistic but depends on numbers to win. The fog of war and fog of exploration options enhances solitaire play. The sweet and flexible PBEM options make head-to-head play a snap and fascinating. Creative players should learn the user-friendly scenario editor. Re-Playability is assured through the random map generator which is replete with options.

People's Tactics may not have super graphics and it may hay a few interface problems. However, if this game was a retail product reasonably priced, I would urge gamers to consider getting it. Since it's freeware, gamers are cheating themselves if they don't download this little gem." 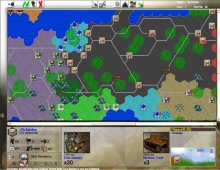