Terrace is a unique board game that rocketed to fame when it was selected to feature as a permanent prop onboard the Enterprise in Star Trek: The Next Generation. Billed as "the purest strategy game," Terrace is most similar to Checkers, but with many significant differences. The game is played on a terraced board, with pieces of varying sizes. Your goal is to capture your opponent's "T" (a small marked piece), or to move your own "T" to the lowest square across the board. Pieces can move up and down levels, but you can capture only a piece that is directly one diagonal tile from you, on a lower level. This capturing system evokes an impression that you are playing on a 3D terrain, and it is a very nice touch.

With unique setup and rules, Terrace introduces many unique features not found on any other game. You can capture your own piece, win in two different ways, and play on a cool terraced board. The computer version allows you to create many more of you own variations because you can call up all the pieces you want, as well as record and replay whole games, get hints from the computer, and take back moves. The board game original has won numerous awards worldwide, including a spot in GAMES Magazine's prestigious "Best 100 Games of All Time" award. You can also play against friends over the Internet in later versions. Definitely a must have for chess fans, or anyone interested in pure, abstract games of wit with no random elements involved.

Note: The download version here is the registered version of Terrace 1.0, the first version released in 1994. 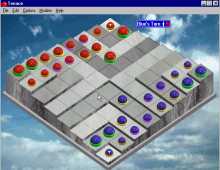