Stratego - the Boardgame-Classic. It's a pretty good adaption of the game. Goal of the game is to get the opponents flag. This means you've also got to protect your own flag. You have different types of pieces each with different strength. You've for example Scouts who are (as the only one) able to movfe more than one square per round, but they are the weakest. Then there are mines which can only be disarmed by miners - an overall very weak species, but necessary to win, coz' usually the flag is surround by mines. Interesting part of this game is, that you can't see your opponents pieces (well, you can see the PIECES, but not their strength...) -.and he of course can't see yours. Think strategic when you place your pieces in the beginning of the game - usually you'll get the thought during the game you could need a mine right here or there, but they're not moveable...

For those who are not familiar with the board game, here is the basic premise: Stratego is perhaps best described as the "realistic, modern military" version of Chess. Each player is allotted an "army" of 40 playing pieces at the beginning of the game, including a Marshal, Captains, Sergeants, Scouts, Bombs, and a Flag. Each piece, similar to Chess, follows its own movement rules. Unlike Chess, success of "attack" is determined by the pieces' ranks, not whether that attack is valid. So a Marshal can remove a General, a General can remove a Colonel, and so on. When equal ranks are struck, both pieces are removed from the board. The game ends when either player strikes his/her opponent's Flag (which cannot be moved). Timing is crucial in the game, and "special" pieces such as the Miners and Spy can tip the scale very quickly.

With good graphics (with several board backgrounds to choose from), and a user-friendly interface, this PC version does justice to the original board game, although too bad the AI is too easy to beat. Recommended for all fans of tabletop war/strategy games.

If You ever played a board game called Stratego then You know all about this one. If You haven't... Place Your pieces on a side of a board (privates, bombers, lieutenants, Marshall, spies...) and try to kill enemy Marshall (only spy, bombs or other Marshall can kill him). Game rules are pretty easy - higher ranks kill lower ranks, no matter who attacks. Bombs kill everybody, bombers kill mines, everybody kills spy, spy only kills Marshall...

You might know the board game stratego. This game has a lot of options and good graphics. So if you like the game stratego than I would recommend this game. You can also change the background and the pieces if you would like to. 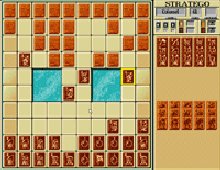 People who downloaded this game have also downloaded:
Magic: The Gathering, Lords of The Realm 2, Scrabble: Deluxe Edition, Populous 2, Panzer General for Windows 95