Richard Carr's Treasure Island is the second and, unfortunately, last game from Carrsoft, the developer of shareware classic Capture the Flag. The game is based on an intriguing (but little-known) outdoor game invented by a business school dean to foster teamwork in students. The concept is simple: two teams battle it out on a variety of islands to get the specified number of treasure chests back to their ship before the other can. To do that, however, requires a lot of thought, planning, and co-ordination among the teammates.

Despite Carrsoft's claim that the game is "a blend of both turn-based and real-time strategy games," it is really just a real-time game with a slight difference: the computer pauses the game automatically after you've accomplished certain tasks (e.g. digging up treasure). This misnomer notwithstanding, the game shines with originality and great gameplay. True to its goal, you have to co-ordinate your teammates that comprise five types of units: the Fighter (best all-around unit), Trapper (good at digging for treasure and laying traps), Runner (best for returning a found treasure chest to your ship), Swordman (best fighter of the group), and the Scout (can see the farthest of the group). Since you can only move one unit and do one thing at a time, planning is essential to winning the game.

The only thing about Treasure Island that will disappoint fans of Capture The Flag is that there is no mulitplayer option. However, the game's tough AI more than makes up for this deficiency, as it does not "cheat" (i.e. bestowed with more resources than the human player) but follows the same rules, and is surprisingly good at adapting to your game plan just as a human being would. Much of the game's over 3 years in development was spent in perfecting the AI, and the results are truly impressive, especially at "Varsity" difficulty level and up. If you're a strategy fan, this game is a must-have. 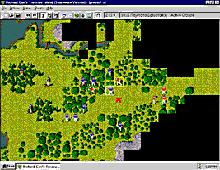