Quod is great Windows version of a creative board game invented by G. Keith in 1979. Similar to chess, the game has simple rules requires sophisticated strategy to win consistently. The goal of the game is to place pieces on a grid so that they form a square. The player who makes a square first wins. You can play against another human player or the computer in this freeware version. A more detailed description is as follows, taken from the official site:

"Quod is played on an 11-by-11 square grid board with the four corners missing. Players take turns placing pieces on the board. Each player begins the game with 20 attacking (colored) pieces and 6 blocking (white) pieces. The object of the game is to outmaneuver your opponent and be the first to outline a square, called a quod, by capturing its four corners with your colored attacking pieces. You use the blocking pieces only for blocking your opponent's squares; they don't count toward making squares of your own. On each turn you place one attacking piece on the board. Optionally, you can place any number of blocking pieces, up to the six allotted, before placing the attacking piece. If both players run out of attacking pieces before either has made a quod, the player with the most unplayed blocking pieces is declared the winner. If each has the same amount of blocking pieces (or if neither has any), the game is declared a draw. A winning square can be any size and orientation, and this is why playing Quod well requires strategy."

Overall, I found Quod to be a fun, unique, and thought-provoking game. The game is similar to MetaSquarer, a more recent classic by Scott Kim (also on this site), but in my opinion is more difficult because the game ends when either player creates the first square. (in MetaSquarer, you can continue to play, collecting points for each square you create). If you enjoy mathematical puzzles that leave no room for luck, Quod will keep you entertained for a long time.

Note: the game was created for Windows 3.1, but should run with no problems on Windows 95, 98, NT, and later versions. 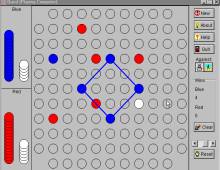